The caring and experienced professionals at Parkville are here to support you through this difficult time.  We offer a range of personalized services to suit your family’s wishes and requirements.  You can count on us to help you plan a personal, lasting tribute to your loved one. And we’ll carefully guide you through the many decisions that must be made during this challenging time.

You are welcome to call us at any time of the day, any day of the week, for immediate assistance. Or, visit our funeral home in person at your convenience.  We also provide a wealth of information here on our web site so you can learn more from the privacy of your own home.

When the business was first created, there was no such thing as a funeral home, and the founding father of the business, Charles F. Evans performed funeral services out of his own home. Fifty years after the founding of their business Evans relocated to Mount Royal Avenue in Baltimore, next to the Lyric Theater. It wasn't until the late 1930's that the funeral business transitioned from home services to formal funeral homes. During the 1950's Evans purchased a parsonage from Hiss United Methodist Church in Parkville, Maryland which soon thereafter became the first funeral home in Parkville. Currently, Evans Funeral Chapel & Cremation Services is owned and operated by Charlie Evans.

Their new updated facilities include the area's first "virtual selection room" where families can make their funeral arrangements via a large computer screen as opposed to an actual showroom. What was once the showroom is now additional office space. The new virtual showroom has been well received by families. They prefer seeing the merchandise on a computer screen rather than in a showroom.

Evans Funeral Chapel & Cremation Services-Bel Air located in Forest Hill opened its doors on March 1, 1993. It is one of Harford County's most progressive funeral homes with authentic furnishings from America's great southwest. It is not your typical funeral home. The atmosphere is very bright and cheerful yet warm to your senses. In addition to its personalized services we now offer video tributes and it has a newly remodeled formal chapel and a fully functional lounge. We are also the only funeral home in Harford County with its own crematory.

Our newest facility opened its doors on January 22, 2009 in Monkton, Maryland which was formerly known as the Henry W. Jenkins & Son Company.  The name Jenkins in the funeral industry goes all the way back to 1799.  We will continue to take care of every detail, and provide you with the professional, personal service that they once did. 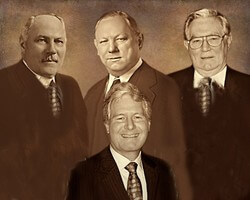 In the Line of Duty
Veterans Overview
Veteran Benefits

A year of daily grief support

Our support in your time of need does not end after the funeral services.  Enter your email below to receive a grief support message from us each day for a year.  You can unsubscribe at any time.